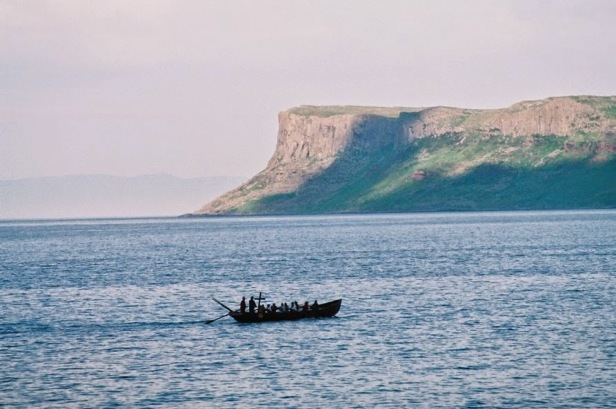 We bring a great treasure in earthen vessel

Today’s readings present some characters who are called to carry out a mission of proclaiming the Word of God. They all have the same reaction: they feel unworthy, incapable, inadequate. Isaiah declares to be a man of unclean lips. Peter asks Jesus to turn away from him because he knows he is a sinner. Paul says that the Risen One was manifested to him, but “as to an abortion,” that is, as an imperfect being, one born abnormally.

The list of statements of unworthiness could continue with the objections of Jeremiah: “Ah, Lord God, I do not know how to speak. I am still young” (Jer 1:6) and Moses: “But, my Lord, never have I been a fluent speaker. I cannot find words to express what I want to say” (Ex 4:10). Vocations to announce the Word of God today are those of the permanent deacon, catechist, and the animator of the listening centers.

There’s also—it is true—one who oblivious to his own limitations, feels too sure of himself. But most people, aware of their miseries, jeer; they say they are not up to the task that is required of them. The lack of preparation is not a good reason to hold back. Study, regular participation in biblical and pastoral courses, the setting up of a small theological library can supply what’s lacking. The perception instead of one’s spiritual inadequacy must be overcome bearing in mind the work of God. He purifies his prophets and apostles and enables them to proclaim his message.

To internalize the message, we repeat:
“Purify, Lord, my heart and my lips, so that I may announce your Gospel.”

Like the Lord, the Christian is also “a lover of life” (Wis 11:26), desires life, commits oneself for life. “I have come that they may have life, life in all its fullness”—Jesus says, referring to his mission among people (Jn 10:10).

How can one fulfill his mission today? What responsibility has he assigned to his disciples? Luke does not respond to these questions with reasoning, but with a story: the call of the first three apostles.

The episode takes place on the Lake of Gennesaret. Jesus is pressed by the crowds and, seeing two boats of fishermen, goes into that of Peter, asks him to put out a little off the ground, sits down and begins to teach the people (vv. 1-3). The frame is not realistic (think how uncomfortable it is speaking from a boat to a large crowd). The scene is deliberately idealized to transmit a theological message. We notice above all the context in which it is set: on the shore of the lake and on a weekday, while people are engaged in their work, while they are sweating to earn a living.

It is not only during the liturgy on Saturday and in the environments and places of worship that Jesus proclaims the Word of God. He proclaims in all contexts, in those sacred and profane ones, because it enlightens, inspires, guides all activities of people.

He sits—that is, he assumes the position of a teacher—being in Peter’s boat. The symbolism is obvious: the boat represents the Christian community. It is that privileged place from which we can expect the voice of the Master. It is to him that one who looks for light, consolation, and hope is invited to turn his gaze.

Together with Jesus, on the boat, there are no exceptional, holy, perfect people! Only God is holy. There are good people, yes, but also sinful. Peter will recognize it also on behalf of others: “Leave me, Lord, for I am a sinful man” (v. 8). However, despite being occupied by sinners, it is from this boat that the Word of God is proclaimed.

Action follows the proclamation of the Word (vv. 1-3). On the orders of the Master, the boat sets sail, venturing on the waters of the sea. There the disciples are invited to cast their nets and to fish (vv. 4-7). It is the Christian community who, animated by the Gospel message she has heard and assimilated, is dispersed through the streets of the world to carry out its mission.

Peter argues, it seems to him that the order given by Jesus is senseless: that is not the appropriate time to fish. But he trusts. He is the first person who, during the public life, manifests his faith in the word of the Master.

It is a big risk that Peter is willing to take. He knows that, if unsuccessful, he is exposed to ridicule and jokes of the colleagues. Human logic would suggest him to give up, but he prefers to obey. After a moment of uncertainty, he decides and sets to work. He believes that the word of Jesus can accomplish the impossible. He has already experienced the power of this word when he saw his mother-in-law cured instantly of fever (Lk 4:38-39).

The result is amazing, the amount of fish caught is huge and the evangelist emphasizes highlighting the various details: the nets are going to break, he should enlist the help of his friends, and the boats are fully loaded and in danger of sinking.

At this point, Luke introduces the reaction of Peter and those who witnessed the miracle. Simon throws himself at Jesus’ knees and declares his own unworthiness: “Leave me, Lord, for I am a sinful man”—he says, while others are caught by surprise (vv. 8-10a).

It’s the way the Bible tells of the encounter with the Lord: Moses covers his face because he is afraid (Ex 3:6); Elijah covers his face with his mantle (1 K 19:13). Like Isaiah—we saw it in the First Reading—Peter also feels sinful. Not because he, until then, had led an immoral life, but realizes the distance that separates him from God and confesses his own unworthiness.

This brings us to the central theme of the passage (vv. 10b-11). The main reason why Luke recounts the episode is to make it clear to the disciples of his community which is the task to which they are called: to be fishers of people.

The fish, we know, are fine in the water and are not at all happy to be pulled out. In the water, however, people are not equally at ease, especially when it comes to the immense, deep, dark, agitated sea. The fish pulled out of the water dies, but people, instead, live. Jesus uses this symbolism to explain to his disciples what their mission is. He does not invite them to “take people with fishhooks,” but to get them out alive, with the net, from the crashing waves from which they risk being overwhelmed, submerged, dragged on to the bottom.

In the Bible, the waters of the sea are a symbol of the power of evil, the forces that lead to death. People who must be “caught,” that is, helped to live, are those who feel overwhelmed by their vices, who are at the mercy of their idols, their unruly passions, who are only capable of doing harm to themselves and others. “Fish” to be pulled out of its hopeless condition is all of humanity that is likely to be engulfed by violence and hatred, war, moral corruption … .

Saint Ambrose said: “The tools of apostolic fishing are the nets; they do not cause the death of those who are caught, but they keep them for life. They draw them from the depths to light and from the bottom to the surface those who were submerged.” This mission is not entrusted only to the priests, but to the whole Christian community.

A final element is emphasized in this symbolism of the passage and it is the ministry entrusted to Peter. He is the one who drives the boat to the place indicated (v. 4); it is he who proclaims his faith in the power of the word of Jesus (v. 5), it is he who recognizes him as Lord (v. 8); it is to him that the invitation to be fisher of people is directed (v. 10).

All these elements indicate that Peter has a particular task to carry out in the Church: to listen attentively to the Word of the Lord and then to lead, together with the other disciples, not where their professional experience and abilities would lead tobut where the Master tells him.

The passage is not intended to solicit those in the Christian community to carry out the ministry of the presidency to claim for themselves the right to command, to impose or even to make themselves masters over the people of God (1 Pet 5:3). It is an invitation to verify the way of exercising the charisma of authority. Do they have full confidence in the Master’s voice? Do they know how to recognize this voice? Are they able to distinguish it from the “wisdom of the world,” the “common sense,” and human calculations, their insights, their personal beliefs?

Every Christian is called to do this examination of conscience. Each one should be concerned if it happens that no one ever considers him an illusion, a dreamer, one who is also ready to “fish at midday” if the Teacher asks him.