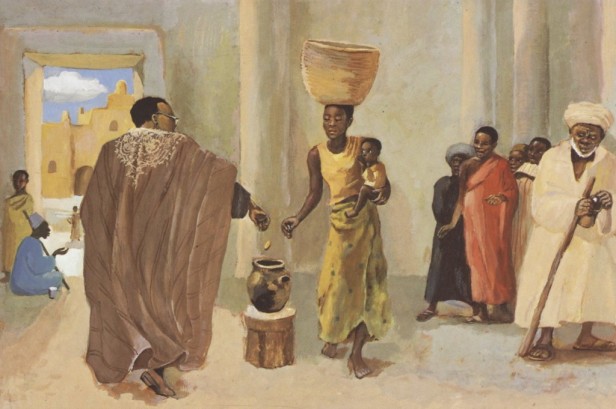 One day, Jesus was standing before the temple treasury, watching people deposit their offerings. He saw a poor widow come and put in all she had, two copper coins, which make a penny. He turned to his disciples and said, “Truly I say to you, this poor widow has put in more than the others. All have given from their excess, but she, in her poverty, put in all she had, all she had to live on.”

We might call this Sunday the “Sunday of the widows.” The story of a widow was also told in the first reading, the widow of Zarephath who gave up all she had left to eat (a handful of flour and a drop of oil) to prepare a meal for the prophet Elijah.

This is a good occasion in which to turn our attention toward both the widows and the widowers of today. If the Bible speaks so often of widows and never of widowers it is because in ancient society the woman who was left alone was at a greater disadvantage than the man who was left alone. Today there is no longer this difference. Actually, in general it now seems that women who are alone manage much better than men.

On this occasion I would like to treat a theme that is of definite interest not only to widows and widowers but also to all those who are married, especially during this month in which we remember the dead. Does the death of a husband or wife, which brings about the legal end of a marriage, also bring with it the total end of communion between the two persons? Does something of that bond which so strongly united two persons on earth remain in heaven, or will all be forgotten once we have crossed the threshold into eternal life?

One day, some Sadducees presented Jesus with the unlikely case of a woman who was successively the wife of seven brothers, asking him whose wife she would be after the resurrection. Jesus answered: “When they rise from the dead they will neither marry nor be given in marriage but will be like angels in heaven” (Mark 12:25).

Interpreting this saying of Jesus wrongly, some have claimed that marriage will have no follow-up in heaven. But with his reply Jesus is rejecting the caricature the Sadducees presented of heaven, as if it were going to be a simple continuation of the earthly relationship of the spouses. Jesus does not exclude the possibility that they might rediscover in God the bond that united them on earth.

According to this vision, marriage does not come to a complete end at death but is transfigured, spiritualized, freed from the limits that mark life on earth, as also the ties between parents and children or between friends will not be forgotten. In a preface for the dead the liturgy proclaims: “Life is transformed, not taken away.” Even marriage, which is part of life, will be transfigured, not nullified.

But what about those who have had a negative experience of earthly marriage, an experience of misunderstanding and suffering? Should not this idea that the marital bond will not break at death be for them, rather than a consolation, a reason for fear? No, for in the passage from time to eternity the good remains and evil falls away. The love that united them, perhaps for only a brief time, remains; defects, misunderstandings, suffering that they inflicted on each other, will fall away.

Indeed, this very suffering, accepted with faith, will be transformed into glory. Many spouses will experience true love for each other only when they will be reunited “in God,” and with this love there will be the joy and fullness of the union that they did not know on earth. In God all will be understood, all will be excused, all will be forgiven.

Some will ask of course about those who have been legitimately married to different people, widowers and widows who have remarried. (This was the case presented to Jesus of the seven brothers who successively had the same woman as their wife.) Even for them we must repeat the same thing: That which was truly love and self-surrender between each of the husbands or wives, being objectively a good coming from God, will not be dissolved. In heaven there will not be rivalry in love or jealousy. These things do not belong to true love but to the intrinsic limits of the creature.